Skip to content
Posted on May 4, 2016July 22, 2016 by Tim Sutton Posted in QGIS BoardTagged QGIS Board
Dear QGIS Community members
As many of you will be aware, in this last year we have been embarking on the process to transition from a loose-knit community organisation to a more formal organisation. This new organisation ‘QGIS.org’ will be a legal entity and will afford us a greater amount of flexibility in how we manage funds, legal agreements and so forth. You can read the statutes for the QGIS.org organisation for more info.
Under the statutes of the new organisation, there will be one user group voting member put forward for each registered user group (user group registration page is here). For each user group voting member we will have a community voting member elected. In addition there will be one voting member from the OSGEO leadership. It is probably best explained by way of a simple (contrived) example:
1) The Martian user group puts forward Joe Alien to be their QGIS User Group Voting Member.
2) QGIS committers put forward nominations for a matching Community Voting Member from within the community. Community member with the highest number of nominations is elected. Only people with git commit rights to an official QGIS repository or write access to the QGIS translation platform on transifex can put forward nominations. The nominated person can be any person from within the QGIS community who is willing to serve as a voting QGIS community member.
3)  The Moon user group puts forward Janet Luna to be their QGIS User Group Voting Member.
4) QGIS committers again nominate a matching Community Voting Member
5) OSGEO puts forward one person to act as the OSGEO voting member.
Voting members will elect the QGIS Board, Board Chairman and approve budgets and the annual report. Once elected, the board will make day to day decisions on behalf of the project as needed. The OSGEO voting member will also serve to ensure that there are always an odd number of voting members to avoid deadlocks. Voting members will have their continued membership confirmed on a 3 yearly basis.
Since we are bootstrapping the QGIS.org organisation, we have not yet elected any voting members. Currently there are 10 QGIS User Groups registered (this number may be different when you read this due to new registrations), thus we would like to invite all people who have Git commit access to any official QGIS repo, or transifex write access to make their nominations for their community voting members. The 10 consenting nominees with the highest number of nominations will be appointed as community voting members.
We will close the nomination period on Wed 11 May if at least 10 unique persons have been nominated, otherwise as soon as 10 unique persons have been nominated.
We will maintain a list of the QGIS Voting Members on the web site for public viewing.
After all of the voting members have been elected they will be asked to elect the members of the board. Board members need not be voting members, any QGIS community member can be elected to the board. For formation of the new board, existing PSC members will automatically be nominated and the community voting members can also put up additional nominations. We would then put the election of the board members to a vote (maintaining the same number of members as are currently in the PSC for now). Once the board has officially been elected, the voting members can then select a chair for the board. Note that all voting will be done electronically via an online form.
By this process we will have a democratically elected board entrusted with stewardship of the new QGIS.org Organisation.
Each year we will hold an annual general meeting and voting members can elect a new chair, or re-elect the existing chair. Similarly on a rotational basis, board members will be up for re-election each year. If things are a little unclear above, I have made a simple diagram which hopefully clarifies things (see below). 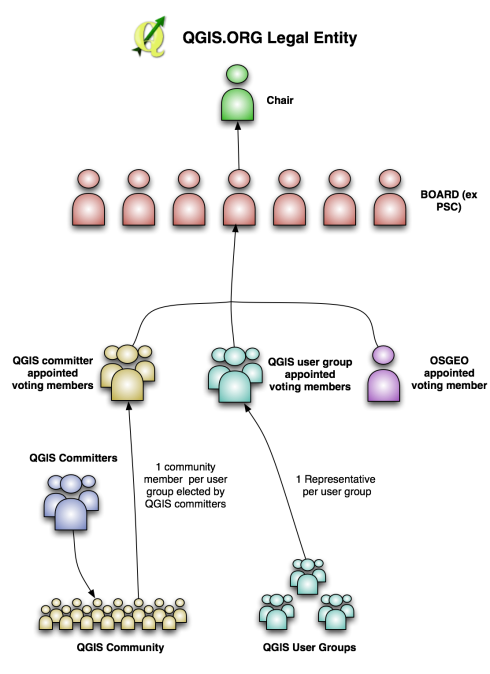 Note that Gary Sherman (QGIS project founder) is board member emeritus and this will not be up for re-election as he has life long tenure on the board.
So if you are eligible to nominate voting members (i.e. you are a committer on any official QGIS repo or a Transifex author), please head over to the form provided to  make your nomination! 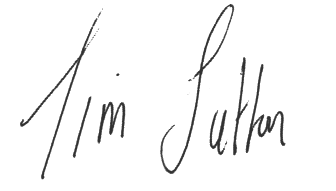