Greetings wonderful QGIS Users, Developers and Supporters! 2016 was quite an  exciting year for QGIS – we released QGIS 2.14LTR which has been a great stable release. We also set the wheels in motion for QGIS 3.0 which we plan to release later this year. QGIS development takes a lot of time and effort – and much of the work is done by volunteers – especially the core project maintenance work which typically does not attract paid-for consulting work like new feature work does.

We are extremely lucky and grateful to have a growing band of sponsors that are helping us to slowly but surely fund more core QGIS project work too. In this post we want to say ‘thank you’ to the many sponsors that have stepped up to the plate when we asked for help and sponsored QGIS. We also want to provide some insight as to what level of funding we receive and hopefully stimulate some friendly enthusiasm to stepping up funding efforts from our users around the world.

Our project treasurer, Andreas Neumann, has been so kind as to compile a very detailed report about the sponsorships and donations received over 2016 which we would like to share with you. Before I share his actual report, let me just clarify that we have two distinct ways of contributing money to the project:

QGIS sponsorship can be made at one of four levels:

Higher tier (silver and up) sponsors are included in the footer of our main web site, http://qgis.org e.g.:

If you want to see your company listed there, why not head over to the QGIS Sponsorship page to find out how to become a sponsor?

Some interesting highlights from Andreas’ report: 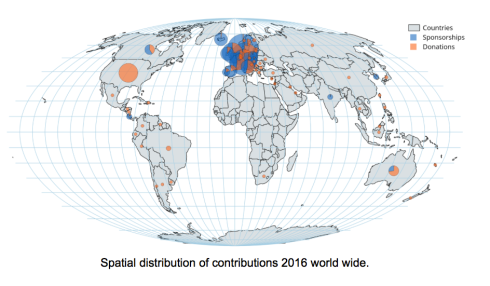 We had  1128 donations in 2016 amounting to a total of  €25108. We had  47 Sponsors in 2016 which raised a total income of  €67921. December is the month that attracts the highest income from donations and sponsors (though that may coincide with additional marketing we did calling for sponsors).  Looking at contributions by country, Denmark was the highest national contributor in 2016, providing a total of  €17795 to the QGIS.ORG project. If you normalize by population,  Iceland provided the largest per capita contribution to QGIS, providing  €9056 per million people.  Iceland also had the highest contribution rate when measured against GDP with  ~€154 per billion GDP. 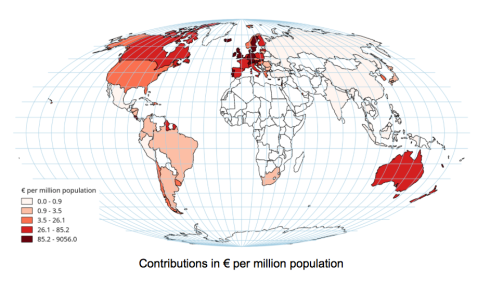 You can read Andreas’ full report in this PDF – a huge thank you to Andreas for preparing this fascinating report, and of course to everyone out there who shared their hard earned money with us – your funding has become a vital enabler for moving the project forward.